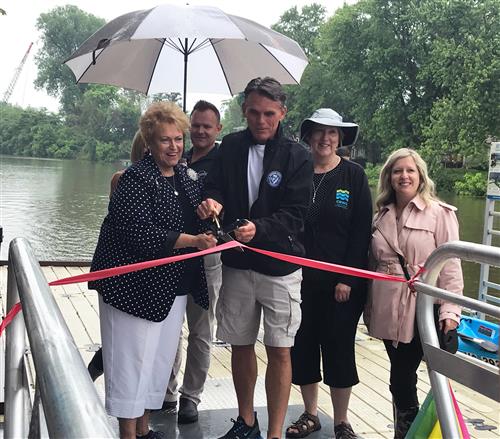 One of the key outcomes of the plan was to focus on installing universally-accessible canoe/kayak launches at strategic points along the river and Lake St. Clair.  As a result, the Mt. Clemens MacArthur Park launch project began in late 2016 and early last fall, the launch, named after the late Neil E. Dempsey, was officially completed.  Supporters, local officials and community members gathered to celebrate with a ribbon-cutting this past June.

Fundraising for this “first” in the watershed started back in late 2016 and was bolstered by a $50,000 Michigan Economic Development Matching Grant to support a crowdfunding campaign.   Many thanks to everyone who donated to this innovative project including special thanks to those who gave gifts of $5,000: Advancing Macomb, Mt. Clemens Rotary Club and its generous members, Chief Financial Credit Union, Greg and Laura Fournier, Spencer Trent Seufert and the CRWC’s Board Restricted Fund.

Since the MacArthur Park launch project was initiated, additional launches have been installed or are in active planning phases in parks throughout the watershed including Camp Agawam in Orion Township, North Clinton River Park and Rotary Park in Sterling Heights, George George Park in Clinton Township, the planned Webber Paddle Park in Chesterfield Township, among others.