Saving the Monarchs One City at a Time 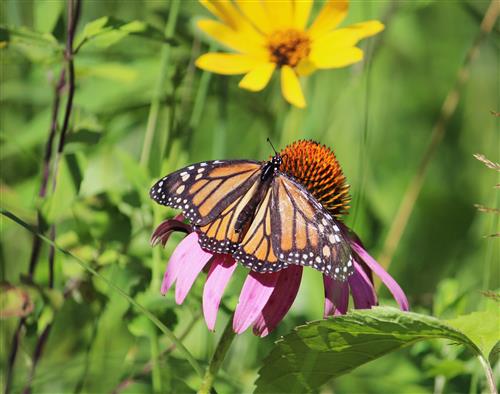 Saving the monarchs one city at a time

I had never seen a butterfly with a sticker on it. She flew between flowers just outside the CRWC office. I stared at her bright orange wings, outlined in black lace with white dots. The sticker was labeled “ABSS 424” and placed under her wing. I thought about the places she could have traveled and who the explorer was that placed the tag on the wing of a monarch butterfly.

It turned out she was from Rochester, about a mile away from our office. She was likely tagged by a resident trying to help a species in trouble.

“Sometimes monarchs are found by people who aren’t far from the release site,” said Angela Babbit – Communications Coordinator for Monarch Watch, a non-profit based at the University of Kansas and leading the tagging program since 1992.

Michigan is in the northern migration range of the eastern monarch, the largest of the two North American populations split by the Rocky Mountains. Both populations are falling. Overall, the eastern population has dropped over 80% and the western by 99% over the last twenty years. This is where urban communities can step up and make a difference.

Nature has a place in cities. When about 80% of people in the U.S. live in urban areas, it has to. Studies are showing how big cities, like Chicago or Detroit, can provide spaces to protect wildlife.

It starts with thinking about Michigan native plants, says Marilyn Trent – founder of Rochester Pollinators, a committee of Rochester City Beautiful Commission dedicated to pollinator conservation, “This is an ecologically solvable problem and it can be solved in our own backyards.”

This meant that the monarch would not receive protection but could be reconsidered every year until they get put on the list or no longer need protection.

One of the monarch’s greatest challenges is the decline in native milkweed plants, which are the only food sources for monarch caterpillars. Climate change, urban development and overuse of pesticides are all contributing factors to the decline in populations.

A survey released earlier this year by the World Wildlife Fund-México revealed that overwintering monarchs covered only 2.10 hectares (5.2 acres) of habitat – about the size of 4 football fields.

“Scientists estimate that the minimum population size for eastern monarchs to be out of the danger zone of migratory collapse is around 225 million butterflies,” says Tierra Curry – Senior Scientist at the Center for Biological Diversity.

“This year’s count was only a third of the minimum size needed to avoid collapse.”

Planting milkweed, grasses and other flowering plants appropriate for Michigan’s climate can help provide all pollinators with basic lifecycle needs. Public parks are wonderful spaces to begin this journey but they cannot do it alone.

“It is up to the residents to fill the gaps,” says Trent, and local governments can also step in to promote more habitats that are friendlier to pollinators.

“There needs to be literally billions of milkweed plants to support the monarch population,” says Curry. “Every milkweed stem that people plant, whether in urban parks or backyards, will help because it can directly host a monarch.”

So, where do you begin to help? Start small with a few clusters of milkweed plants around your house or on a balcony, and see who checks them out. Here is a list of some other wildflowers to try. Public participation  is important for helping wildlife and their habitat, too. Hands-on experiences with nature have a way of opening eyes to a wonderful world that you may never have known was there.

“My goal is to help the everyday person know that they can do something,” Trent says. Be on the lookout for opportunities to get involved with programs like Monarch Watch, Rochester Pollinators, and other events hosted by your local watershed councils.

Encourage your mayor to take the Monarch Pledge. This pledge includes a list of actions that cities can do to improve native habitats. Thirteen cities in Michigan have taken the pledge, which include several from within our watershed: Chesterfield, Ferndale, Madison Heights, Oak Park, Rochester, Rochester Hills, Shelby Township, and Warren.

“When people start to interact with these species, they start to care more about them because they learn about them through their own experience,” says Babbit. “That’s one of the biggest goals for us; to get people involved.”