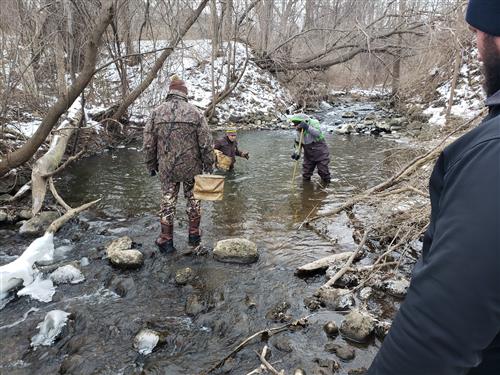 We walked the edge of a one-lane bridge overlooking Paint Creek – one of the last remaining cold-water trout streams in Southeast Michigan. Fresh snow and salt leap between the concrete and guardrails, falling into the icy riffles below. One of our volunteers, John, pointed through his breath toward an easy access point down to the river. We decided that was the spot where we would set up to capture some stoneflies.

For 17 years, CRWC has sent brave volunteers throughout the watershed in search of a special aquatic macroinvertebrate, referred to as the Winter stonefly. Several species of stoneflies exist within the Clinton River watershed; however, the Winter stonefly has unique biological characteristics and require special habitats to survive. These habitats are only found in clear, clean, cold, and fast-moving streams, which makes them a reliable indicator of good water quality. As their common name suggests, the best time to find them is in Winter – when the temperatures are cold and predators scarce.

The late January day began clear with barely a temperature at all. Five adventurous volunteers were eager to walk in the water, dip nets in hand, to see how many Winter stoneflies we could find. After 30 minutes of prodding under the riverbanks, along dead woody debris and frozen leaf packs, the group successfully found a handful of stoneflies. This ended up being the average number collected over the 15 sites this year.

Our 17-year dataset shows us that stonefly populations are fluctuating up and down over time, and climate change and urbanization are only steepening this rollercoaster. Stonefly populations are sensitive to changes in stream temperature, water clarity, and flow. Monitoring the presence or absence of them gives us a glimpse into how each of these characteristics may be changing at a given stretch of river. This is where CRWC’s yearly search has been an incredible resource for keeping an eye on stream health. We are already seeing changes in climate conditions and the surrounding land uses. The stoneflies are telling us just how well the stream is functioning as result of these changes (or how violent the rollercoaster is getting).

Temperatures in Michigan have risen nearly 3-degrees Fahrenheit over the last 100 years. Climate predictions for Southeast Michigan say that warming will continue primarily in the Winter and Spring seasons, along with an increase in annual precipitation. These warming temperatures are creating stronger, more intense weather events, and they are happening more often. We see these changes reflected in the stream flows (especially within our urban areas), which are getting flashier – meaning that water levels rise and fall quickly over shorter periods of time. This is due to the sheer volume of stormwater running off parking lots and roadways directly into the streams.

What does all of this mean for stoneflies and other freshwater creatures? Any suitable habitat that exists now may be in jeopardy of shrinking or being eliminated. Human activities, like urbanization, have seriously altered freshwater ecosystems, more so than many other habitats. Our freshwater systems are quite vulnerable to climate change, and they are getting warmer. This warming may alter the timing of stonefly development and emergence as adult bugs. Macroinvertebrates are important links in the food chain between fish, birds, and bats, and warming waters would threaten the strength of this link.

Our restoration efforts along the Clinton River, Paint Creek, and other tributaries focus on protecting habitat, improving water quality, and increasing accessibility. Macroinvertebrates, in general, are a great barometer for success. We will continue to watch over them and assess their well-being for years to come. We invite anyone interested or curious about what lives and thrives along the river’s bottom to join our team of volunteers and make a positive impact on our precious water resources. You never know what nature will reveal unless you are out there to experience it. The river did not disappoint us on our cold stonefly adventure.

Clouds quickly moved over us, darkening our tiny outdoor lab. A thin layer of intricate snowflakes began to coat our bare hands and data sheets. A flock of cedar waxwings feasted on bittersweet berries along the stream bank – barely taking notice of us wading through the stream, laughing, and bragging how cold we were. I cannot think of a better reason to be outside in a river, in winter, with other dedicated volunteers. We were experiencing nature, which gave greater meaning to our work in conserving one of the last cold water trout streams in Southeast Michigan.